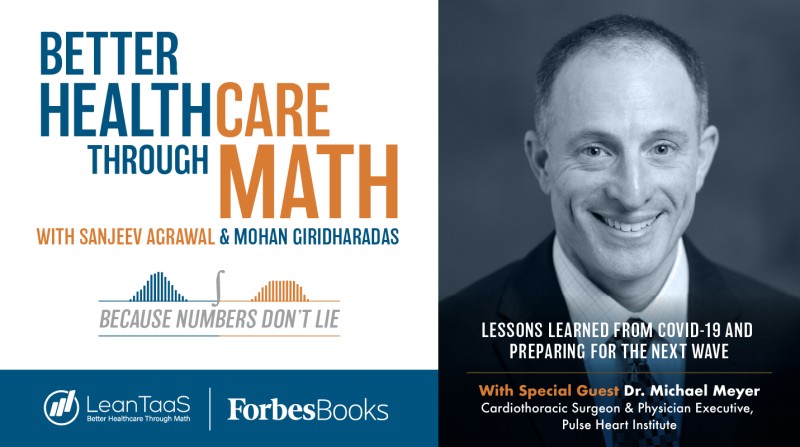 Part 1 of a Series on Lessons Learned from Covid-19

This blog was originally published as a podcast on Forbes Books

Sometimes it takes a physician executive with a completely different perspective to manage dramatic change like COVID-19. More importantly, this perspective is valuable not just in reacting to the initial wave of this pandemic, but also anticipating the needs for the subsequent second and third waves.

Dr. Meyer spent much of his 20 years performing heart and lung surgery in the military, a background which often involves what he referred to as “austere care and unexpected situations.” Having been deployed to Afghanistan and Iraq, he learned valuable lessons from a leadership standpoint. When it came to COVID and disaster planning, he felt that those with military experience were able to draw on it heavily.

He shared, “My transition into leadership had been one of working on projects and that’s how I got to be involved with the leadership of Pulse Heart Institute. My recruitment to be chief medical officer during COVID of the biggest hospital in the MultiCare health system was related to that kind of work.”

As CMO, Dr. Meyer was deeply involved in the planning and execution of how to take care of the surge of patients.  He stated, “Part and parcel to that was taking our machine, our engine of the hospital — the operating room — shutting it down and then restarting it and managing all the doctors who were involved in that process.”

Lessons Learned #1 – It’s All About the PPE

Dr. Meyer noted that when COVID hit,everything was dictated by personal protection equipment (PPE) supply. “The hospital system, by hospital, we could tell you to the hour how much PPE we had available. Very early in that initial wave as the patient volumes surged, we could tell you that, if this continues, we will be out of masks in three hours from now.”

“Everything we did had to do with PPE supply, which is why the mandates to stop elective surgery came in the first place. And we ramped up, at least in Washington state. I can tell you that the ramp up and the permission to do elective cases was also based on PPE supply.

This experience led to a plan to be agile, nimble and ready for wave two and thee, stocking up on PPE between waves. And it’s still an ongoing process. Other PPE conservation efforts included reconfiguring use of the hospital. For instance, Dr. Meyer said that at Tacoma General Hospital, they took an entire floor of the hospital as it was the only one that had the appropriate type of negative pressure configuration. “ We could reconfigure it just for COVID positive patients or people that were suspicious of having COVID. So when you do that, you can actually start minimizing some of your usage.”

Other ways to reduce the use of PPE were developed. “You can have fewer visitors into a room, for example, you can switch to an air filtration system called a capper instead of a mask based system. And so we did other maneuvers to minimize our PPE usage, which we are still doing. We did not need an entire floor to care for the patients. We were able to scale that back so we could resume other kinds of surgery, but we continue to stock. I know that from talking to the logistics, people every day, they’re in a battle to secure this stuff.”

Another shortcoming that quickly became apparent was the inability to centralize how and where patients needed to be transferred within the healthcare system. Dr. Meyer continued, “One of the things that we were forced to do during the first wave had to do with where was the best place to take care of a certain patient. How do you level load the population that’s coming in? We had many systems and communities. It’s very regional. But if I receive a consult from a doctor somewhere, either within our system or even at a hospital outside our system, they contact the transfer center, the transfer center contacts me and we figure out what to do. Well, the transfer center concept really got injected with steroids. It turned into a very powerful disposition center for patients. And that was one of the things that we continued on through the second wave and that we continue to refine because we realized that without, and that was one of our Achilles heels at the beginning, because we weren’t quite sure how to get people where they needed to be because there was not a centralized way to do it.”

Dr. Meyers said that they kept to that strategy for the second wave and refined it even further. Now that system actually can take any consult, whether it’s for COVID or for something else. Patients can have a disposition within a matter of an hour or two, where before it could take 24 hours. It’s a benefit for the patient and it makes it better for the system to level and figure out the best place for a particular patient to be sent.

When you’re hit with such a big demand and supply shock, systems tend to adapt very quickly.  Tools and technologies got accelerated during this period. In the instance of COVID, telemedicine became more pervasive across the board.

Dr. Meyer observed, “What’s really fascinating about it is that our system had been on a path for years to figure out how to do virtual care. And there was always a reason why it couldn’t be done or at least couldn’t be done effectively because there are some places where it was being done pretty well. Like they’ve always had a virtual psychiatric care presence in places in our system. And that was a pretty well worked out system for that. But as far as doing primary care, specialty care and sub-specialized care, no one wanted to venture down that path until we were forced to. So suddenly it was for multiple reasons to make sure that patients were getting the care they needed.”

“So telemedicine for rhythm problems for the heart, it is really effective because they already have pacemakers. For specialty care, like what I do, what was nice about it is that because the technology was fairly mature for this space already, I could have a screen with their CT scan to show them these x-rays and I could have multiple screens up and show them what they needed to see. And I do that in the office as well. I think a lot of the patients still were able to make the connection with their surgeon that is very important in the care. And so it really accelerated. And I think as, as the hospitals have opened, there are certain places where it has persisted. Some of the specialty care, it’s definitely remained. It’s created a growing business for virtual consults out of the area.”

What they’ve learned will help keep hospitals running, whether it’s from the next wave of COVID or some future crisis. “I don’t think we will have a time where we will stop the operating rooms because of these problems from wave one and wave two. One reason is PPE. The secondary issue was not understanding the pattern and how many patients were going to come and leaving bed space available. If you have a very large inpatient hospital schedule, well, those patients have to go somewhere after surgery. If all the beds are taken up by post-op patients, we have nowhere to put COVID patients. I think we’re smarter about that right now.”