Every infusion center faces the operational challenge of maximizing its most scarce resources – infusion chairs, as well as nursing and pharmacy resources. At the heart of utilization is time, and while timing issues arise during the course of a treatment day – for example, a patient’s allergic reaction to a drug extending an appointment for longer than anticipated – a number of time-related obstacles find their origin in the creation of the schedule itself.

This article provides an overview of the concepts of both lead time and clog time, and examine the typical scheduling progression at infusion centers and the problematic issues that often arise. Additionally, this post will cover the best methods for scheduling appointments based on lead time, including:

The opportunity for managers and schedulers to maximize the utilization of the infusion center’s resources lies in effectively managing lead time.

Most infusion centers schedule along the same methodology, where the current week and the next week are typically quite full, and appointment availability frees up at an increasing rate for the next six weeks.

The scheduled lead time determines how quickly availability opens up. The shorter the lead time, the quicker availability opens, while the longer the lead time, longer it takes for availability to open. However, the exact appointment profile of a center depends on a variety of factors, including provider preference, treatment type, patient population and culture. For example, if the patient population at an infusion center consists mostly of oncology patients, the scheduling lead time might fall on the shorter side, whereas if treatments consist of a majority of non-oncology patients, some appointments might get booked months out.

Most often, schedules for any particular day fill up as that date gets closer, and a rather typical scheduling progression finds that the middle of the day is already filled several weeks out.

Infusion centers tend to schedule their appointments far in advance due to the following:

A common theme emerges in the progression of scheduling: there is a mindset amongst all stakeholders of grabbing appointments early for each individual patient before availability runs out. However, the goal of every infusion center is to provide treatment for all patients who need it, and while, on the surface, it would appear to be a patient-centric approach to book appointments far in advance, that model can be flawed and, in fact, decrease patient access to an infusion center’s scarce resources.

There are three potentially problematic issues with booking appointments far in advance, with a long lead time, and those are:

Infusion center appointments, like many medical treatment appointments, are notoriously unpredictable, and those scheduled far in advance are simply more likely to change – they might be moved, have the corresponding order changed, or a multitude of other possible changes, including an outright cancellation. Clogged schedules are created by long lead times for appointments, and they lead to a decreased availability of open time when it gets close to the day of treatment, forcing schedulers into discretionary overbooking of infusion chairs. Lastly, when appointments get cancelled, chairs and nurses end up underutilized; when appointments get added on discretionarily by schedulers, they become overutilized.

An infusion center’s cancellation rate is almost always related to lead time, with long lead times resulting in higher probabilities for an appointment to be cancelled due to changes in the patient’s course of treatment, changes in the condition of the patient, or a variety of other factors. Below is an example where at an infusion center when lead times go beyond 30 days, there’s a 50 percent chance the appointment will be cancelled.

The chart below quantifies the amount of clog time for an infusion center. While most appointments are cancelled fairly quickly, there is a significant number of cancelled appointments that clogged the schedule for more than four weeks. That clog time represents lost scheduling availability – if scheduling was being done more optimally, the facility would have had an additional 10 slots daily for the past four weeks. 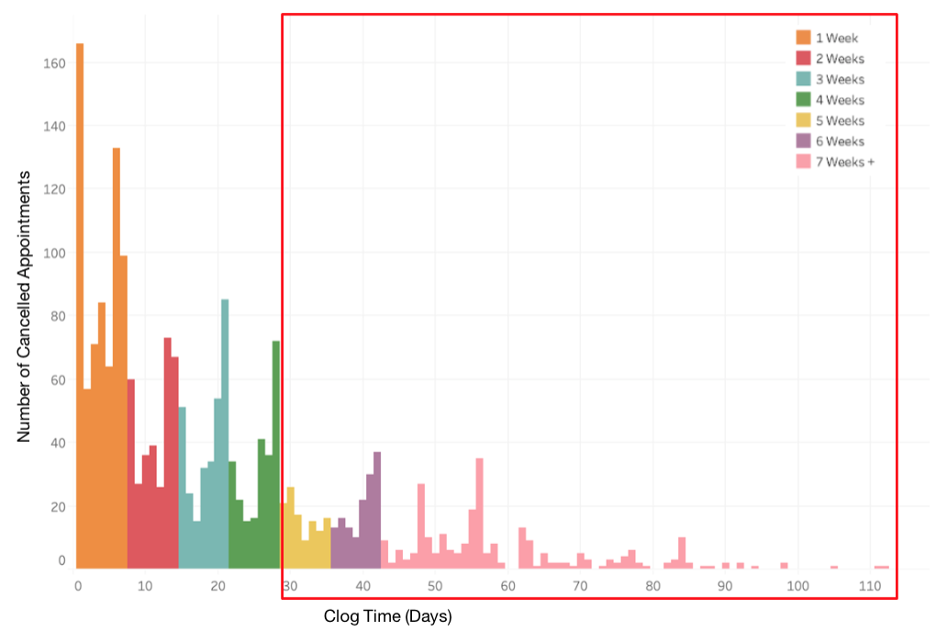 Recommended solutions to optimize infusion center schedules include the following:

Reducing scheduling lead time reduces clogged time, and it’s recommended to “draw the line” when the likelihood of having to cancel an appointment reaches 50 percent or more In the example from above, that decision-making criteria results in limiting lead time to 30 days or less. 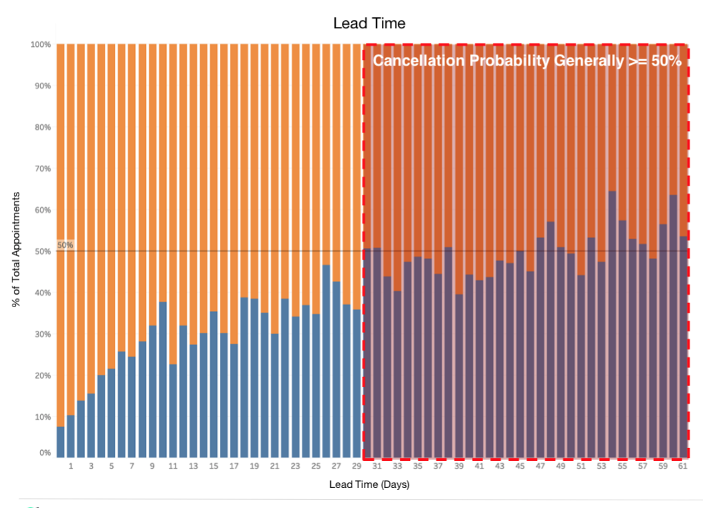 To keep scheduled appointments up-to-date, it’s important to establish a feedback loop so that when appointment details change, they are reflected on the schedule as quickly as possible. Making updates to the schedule in real time is ideal, but it’s also the most difficult implementation as updates usually originate from the provider side, and providers most often do not have either the time or the resources/tools to make changes on infusion schedules. An alternative best practice involves establishing a weekly patient review meeting with the clinical staff to go over the upcoming weeks’ appointments and cancel any treatments for patients whose conditions are not stable, meaning they have a higher chance of not showing up or cancelling on the same day. This option has been proven to have a sizable impact on reducing the number of no shows and same day cancellations.

Lastly, analyses of historical data tend to show a consistent demand for appointments book on, or close to, the date of treatment, and any schedule optimization plan has to account for, and accommodate, those instances [Note: if an infusion center already utilizes iQueue for Infusion Centers, chances are an optimal scheduling template has been created to accommodate both a center’s highest volume days and normal cancellations rates, and is sufficient to meet add-on needs.].

The two most common time frames for reserving slots are same day add-ons and one-week out appointments. The chart below illustrates that an infusion center had more add-ons than it did same-day cancellations and no-shows, as well as shows a breakdown in hours indicating more add-ons were received in the afternoon. In this case, it would make sense for the infusion center to reserve a few time slots for add-ons. Of course, if the historical data was reversed, and there were more same-day cancellations and no-shows than add-ons, the time made available from the cancellations would likely render reserving time as unnecessary. 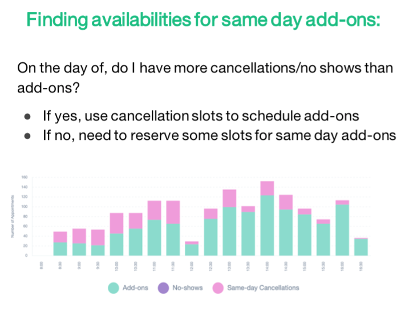 Similarly, the same exercise is valuable in evaluating whether reserved slots are required for one-week out appointments. However, instead of using add-on and no-show analytics, schedulers would instead refer to Booking Patterns, using that analytic to understand demand within one week of lead time and by hours of the day.

If an infusion center experiences low scheduling availability, or schedules that always seem to stray from what was planned, long lead times could very likely be one of the  causes. And, while clues to both diagnosing the specific problem and implementing the most effective solutions lie in a facility’s own data, two general best practices are to 1) implement a cap to limit long lead times, and 2) reserve a few time slots for common short-lead time add-on appointments.

For more information on how to unclog an infusion centers schedule by utilizing shorter lead times, watch the recorded webinar on demand, “How to Unclog Your infusion Schedule.”

What was the state of cancer center operations in 2022? 3 key findings from a new survey by LeanTaaS and ACCC